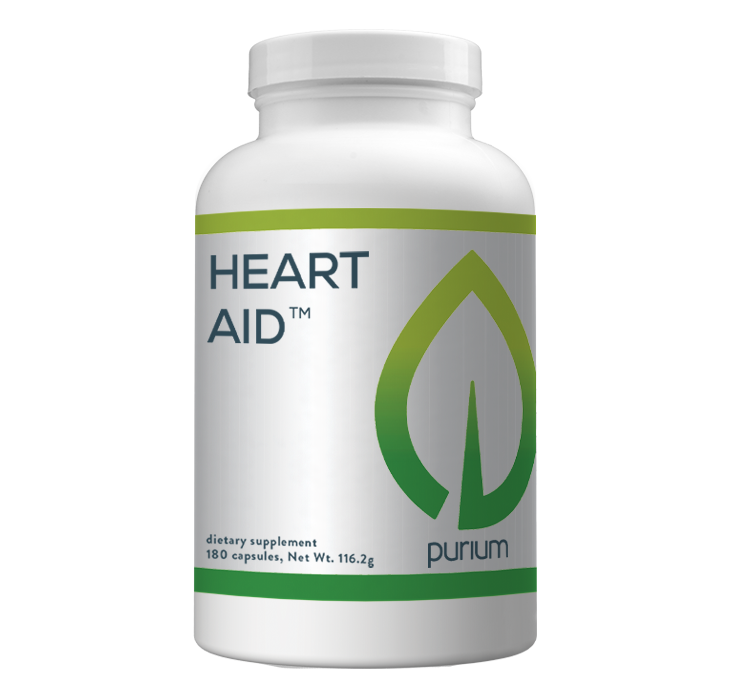 Purium‘s Heart AidTM has been specifically designed to support healthy cardiovascular function. It contains a wide variety of herbs used historically by healers, shamans, and naturopaths to reduce the effects of aging on the heart and support natural chelation. We recommend taking it with our Ionic ElementsTM as part of any heart-health or anti-aging regimen.

Instructions: Take six capsules daily. For best results, take 3 in the morning and 3 in the evening.

Use our Purium Code: HealthStatus  for the best discount available.

What it is: A proprietary blend specifically designed to support a healthier cardiovascular system. It contains a wide variety of herbs used historically by healers, shamans, and naturopaths to reduce the effects of aging on the heart and support natural chelation.

One out of every 3 Americans over the age of 30 are at risk for heart failure
Hawthorne berry is most associated with its widespread use as a tonic for the heart. Specifically it protects arterial walls, has the ability to dilate coronary blood vessels and strengthen the heart`s pumping abilities. Those who suffer from angina, therefore, would most likely benefit from hawthorne`s berry`s ability to increase blood flow through the arteries. Additionally, for the same reason, those afflicted with hypertension (high blood pressure) may alleviate their condition since narrowed arteries require the heart to work more strenuously in getting blood through them. People who suffer from tachycardia (rapid heart beating) and cardiac arrthymia (irregular heart beating) may also find relief. It also has antioxidant properties which may help offset arterial damage from plaque formation and accumulation. In short, Hawthorne berry is seen by some as an all-purpose heart medicine.

Hawthorne berry, because of the powerful cardiac benefits listed above, it is now one of the most prescribed heart remedies in Europe.
The hotness produced by cayenne is caused by its high concentration of a substance called capsaicin, which has been widely studied for it`s pain reducing effects, its cardiovascular benefits, and its ability to help prevent ulcers- it also effectively opens and drains congested nasal passages. Cayenne and other red chili peppers have been shown to reduce blood cholesterol, triglyceride levels, and platelet aggregation, while increasing the body`s ability to dissolve fibrin, a substance integral to the formation of blood clots

Traditionally used as a tonic for the heart, cultures where hot peppers like cayenne are used liberally have a much lower rate of heart attack, stroke, and pulmonary embolism. Research suggests that the volatile oils found in the leaves of the coriander plant, commonly known as cilantro, may have antimicrobial properties. It is also rich in beneficial phytonutrients and flavonoids such as quercitin.
Cilantro is widely used in the Middle East, Asia, North America and southern Europe, but its roots can be traced back as far as 5,000 BC due to its use for medicinal purposes.
Guglipid is a standardized extract prepared from oleogum resin (gum resin) of Commiphora mukul, an Indian medicinal tree that has been clinically proven to reduce the levels of harmful serum lipids in the bloodstream.

Whole books have been written about garlic, which is rich in a variety of powerful sulfur-containing compounds that are the source of many of its health promoting effects. Numerous studies have demonstrated that regular consumption of garlic lowers blood pressure and decreases platelet aggregation, serum triglycerides and LDL- cholesterol (the potentially dangerous form) levels while increasing serum HDL-cholesterol (the protective form) and fibrinolysis (the process through which the body breaks up blood clots). As a result of these beneficial actions and others attributed to the manganese, selenium, and vitamins b6 and C it contains, garlic helps prevent atherosclerosis and diabetic heart disease, and reduces the risk of heart attack or stroke.

Recent studies have found that ginger lowers blood cholesterol and reduces blood clotting. The pungent compound, gingerol has been found to have a structure similar to the well-known anticoagulant, aspirin, which may explain the similar effect that the two compounds have on prostaglandins. Ginger has been shown to have significant effects aggregation, important in cardiovascular health and arthritic conditions. Ginger has been shown to relieve pain, improve joint mobility, decrease swelling and morning stiffness in rheumatoid arthritis. Ginger is also a very effective antibiotic agent and strong antioxidant.

Arjuna is a unique herb that helps maintain a healthy heart and reduces the effects of stress and nervousness. Arjuna`s ability to suppress the blood`s absorption of lipids indicates that it has cholesterol-regulating properties. Its principle constituents are sitosterol, ellagic acid, and arjunic acid. The bark of Arjuna is useful as an anti-ischemic and cardioprotective agent in hypertension and in ischemic heart disease, especially in disturbed cardiac rhythm, angina, or myocardial infarction.

Arjuna, used by herbalists in the Far East for four centuries, is the Ayurvedic herb of choice for cardiovascular health. Recent studies have shown arjuna can lead to a slight increase in the HDL-to-total cholesterol ratio and an overall improvement in the cardiovascular profile. The bark of Arjuna inhibits the oxidation of LDL and accelerates the turnover of LDL-cholesterol in liver.
Scientists first became interested in grape seed extract in the latter part of the 20th Century due to an outgrowth of research about the “French Paradox.” The French Paradox shows a low incidence of heart disease (nearly half that of the United States) among the French despite a high incidence of known dietary and other contributing factors to heart disease. Some scientists believe that the secret of the French Paradox is red wine, which is an integral part of the French diet. Further research suggests that OPCs present in red wine can promote cardiovascular health. Grape seedshave been found to be the richest source of OPCs.

Grapeseed extract is 20 times more powerful as an antioxidant than vitamin C and 50 times more than vitamin E to protect against free radical damage. Also has been shown to possess anti-viral potential. Contains powerful antioxidants known as OPCs. European doctors prescribe OPC containing drugs for various vascular disorders that are likely to benefit from increased blood flow. Macular degeneration and cataracts may also improve by means of the extract`s effects on circulation.