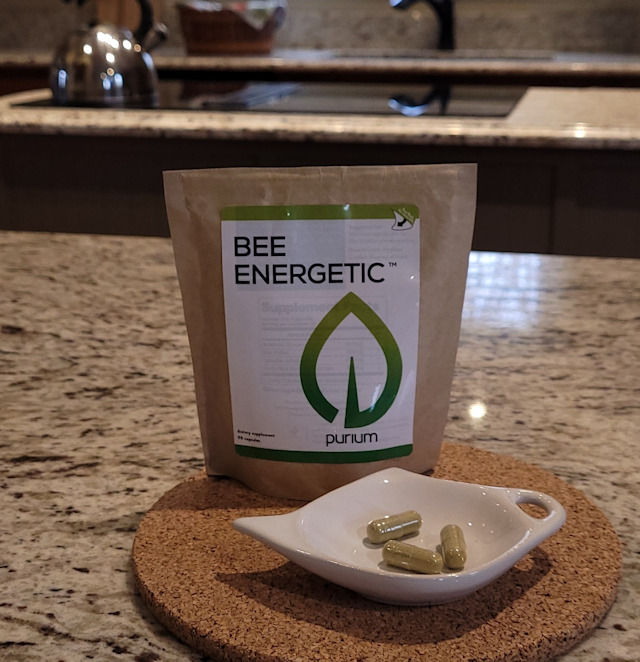 Natural energy levels are supported by a healthy adrenal system, aka our fight or flight fuel tank. Reduced adrenal effectiveness leads to a reliance upon stimulants like caffeine and sugar. The select ingredients in Bee Energetic support a healthy adrenal response to fatigue.

Purium’s Bee EnergeticTM contains nature`s most energizing foods without ephedrine or added caffeine. This powerful combination of plant powders can actually build up your immune system and support your adrenal glands while giving you the sustained energy you really need. We recommend combining Bee EnergeticTM with our Revive-It-AllTM for optimal mental and physical health.  It can be taken with other Purium products as well.
Servings per container: 30
Instructions: Take three capsules as needed for a nutritional boost or prior to exercise.
Use our Purium Coupon: BIONICCARRIE  for the best discount available.

What it is: A non-stimulating, all natural formula that is amazingly effective yet completely safe; Bee Energetic is a powerful combination of plant powders that can actually build up your immune system and support your adrenal glands while giving you the sustained energy you really need. Bee Energetic does not contain caffeine or ephedrine.

>>The current prices for the Entire Purium Line as of November 24th, 2022 are Here<<

`Fight or flight` is the most basic human and animal instinct; it is triggered by primordial reflexes, which today cause adrenal burnout in most people in a westernized culture where clocks, schedules, artificial light and stimulation are the rule as opposed to the exception. Our addiction to coffee, so-called “energy drinks” and other stimulants is a result of this lost adrenal support which is our reserve energy, our back up system, our “second wind” – nothing restores integrity to your adrenal system like this unique herbal combination, taught to me by the late great Bernard Jensen.
– Dave Sandoval