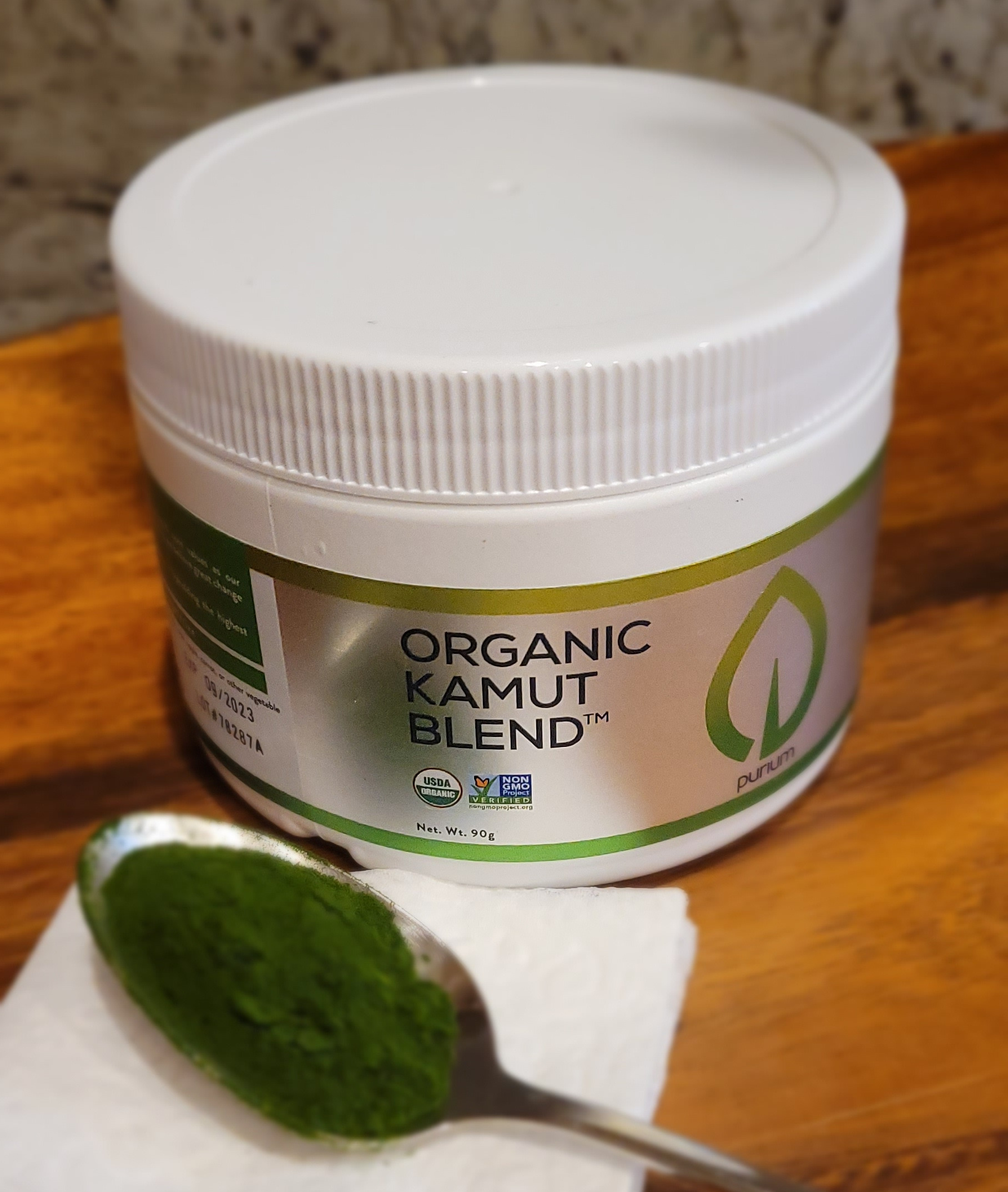 Eating clean and green is fun for the whole family.

In nature, there are a never-ending amount of amazing plants that can help you to get the nourishment that is necessary for leading a healthy and energetic lifestyle. As science casts a more open-minded and educated eye on these species, we learn that they hold precious secrets of which we have previously been unaware. Wheat grass is just one of these plants, and as you learn more about it, you may find that you will want to include it into your daily nutrition plans.

Purium`s Organic Kamut Blend is grown in nutrient-rich, organic soil, watered with mineral springs, and harvested at the peak of nutrition. Kamut Blend is a juice extract from the leaves of Kamut a superior non-GMO, non-crossbred, nutrient-dense heirloom-seed Egyptian wheatgrass. We have combined it with oat and alfalfa to give it a sweet taste and increase the mineral and trace mineral content. We recommend combining Organic Kamut Blend with our Organic Spirulina.

Independent research shows that Organic Kamut Blend contains more powerful antioxidants and nutrients, gram per gram, than other green drinks on the market. Grown in organic soil, Kamut Wheatgrass absorbs 92 of the known 102 minerals from the soil.

All these potent elements are digested in minutes and work together to lightly cleanse the body, promote cell regeneration, increase energy, combat fatigue, raise alkaline and lower acidity while providing the enormous amount of green leafy vegetable nutrients required daily.

Instructions: Take 1 tsp mixed in water, aloe, apple, carrot, or other vegetable juice, 2 times a day on an empty stomach.

Use our Coupon Code: BIONICCARRIE  for the best discount available. 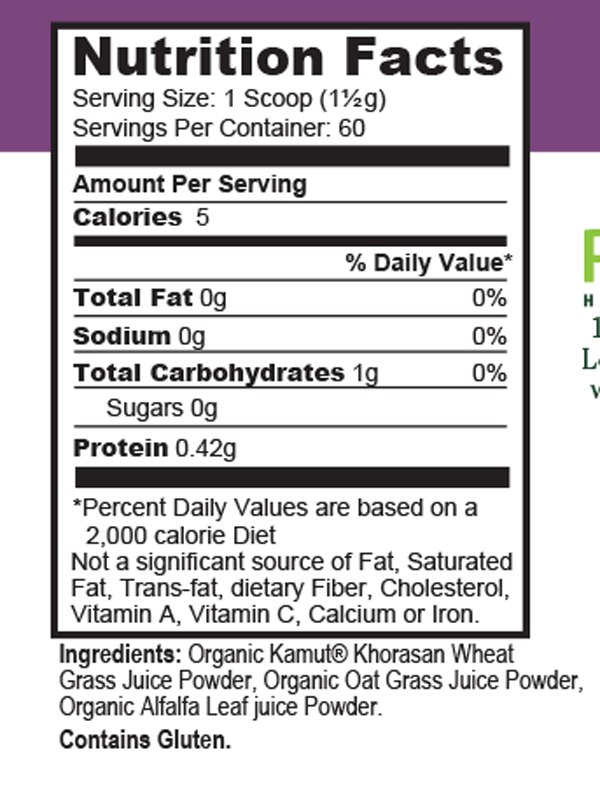 Wheatgrass is the young, freshly sprouting stage of wheat. During this time, it is filled with all of the nutrients that it needs to grow into its full-grown version, while carrying the essential nutrients that will be passed on to any animals that ingested the plant. Today, wheatgrass is a popular ingredient among health food consumers, and it’s widely accepted as a health food even among the most casual of health food supporters. It is commonly juiced straight from its whole and natural state, but it also is sold in pill, capsule and powdered form for ease of use, and inclusion in the diet at the discretion of the consumer.

The benefits are staggering:

Wheatgrass can be found at a large portion of health food stores, drink shops, and the like because it is famous for carrying an intense payload of nutrients to those who consume it. The lack of proper nutrients in food causes many to seek alternatives to taking traditional supplements, and wheatgrass is among the most popular of these methods.

Some will eat wheatgrass to help settle their stomach. Others use it to prevent unpleasant intestinal disturbances like constipation. This is done by softening the stools and allowing you to be able to engage in proper elimination. This is extremely important to your health, because if you don’t go to the bathroom, toxins can build to a point where getting sick becomes very easy.

It Is Low Carb

Wheatgrass is low in carbs, so you can include it in a low carb diet. This is great because of the vitamins and minerals that it offers.

It Is an Alkaline Food

Wheatgrass is an alkaline food, which makes it a good food to eat to fight off the effects of an acidic stomach, and well as limit the amount of acidity in your system. Acidic environments are not good for the body, so it’s very important to remain as pH balanced as you can.

Chlorophyll is an antioxidant that is found in many varieties of green plants. This agent is very close to hemoglobin in human blood, so it is easier for the body to use it and incorporate it into healing processes. While protecting the cells from being damaged by free radicals and oxidation, which is the human equivalent to rust, it allows the red blood cells to carry more oxygen to your cells, which produces and healthier, more youthful appearance in most people.

What Is in Wheatgrass

Now that we can see what is in this amazing plant, we now know that it is naturally high in a multitude of vitamins and minerals, primarily potassium, manganese, iron, copper, and selenium. It also contains high amounts of vitamins C, A, K, and E. In a very interesting twist, it was previously thought that vitamin B12 was contained in wheatgrass as well, but it turns out that B12 is actually manufactured by bacteria that live on the plant.

If you’ve been interested in trying wheat grass, you’ve probably already encountered it in its rawest, most readily available form, the whole plant. One very interesting thing about wheatgrass is that it is also sold in 3 – 4 other forms that you can use in a few different ways for convenience, versatility, or for fun. These other forms will give you more options on how you can choose to ingest wheat grass, so that you can be sure to gain the health benefits that you’re looking for.

Juiced wheatgrass is definitely the most common of all of the forms of wheatgrass. It is usually juiced directly from the freshly harvested wheat grass plants and served on demand. In the last 10 – 20 years, wheatgrass juice drinks have become a popular way to supplement nutrients and gain some nutrition in most moderately developed areas. Many juice and smoothie shops offer wheatgrass for a small fee as an additive to their drink selection. Sometimes they offer wheatgrass in a shot, but they are often served mixed with other juices to make the taste of the juice more pleasant.

Wheatgrass powder is a substance made from the the dehydration of wheatgrass juice. The high vitamin and mineral rich content of the wheatgrass makes wheatgrass powder and excellent tool for fortifying foods and drinks at home. This is particularly helpful for busy people who are on special diets and need to replace nutrients that they can’t get in other food sources or that are currently outside of the diet that they’re on. Simply scoop a few spoons into your favorite drink and you have all of the fruits and vegetables you need for the day!

Wheatgrass capsules are simply gel caps that are filled with wheatgrass powder. These capsules help you to be able to take them without having to use any kind of equipment for blending or mixing. This way, you can simply swallow the capsules and gain the health benefits that are contained in the wheatgrass powder inside.

These are simply the solid form of wheatgrass powder capsules. They contain the same benefits found in other forms of wheatgrass with a slight variation in the packing.

Wheatgrass has been a health boosting favorite of people for hundreds of generations. In ancient times, it was used in tonics for vitality and health. Today, it is ingested in various forms from liquid to powdered, and it is placed in drinks and used as a food additive.

According to some studies, wheatgrass can help to balance the amount of gut flora the body carries, and can kill harmful bacteria that can cause other serious health issues over time.

Purium`s Organic Kamut Blend is grown in nutrient-rich, organic soil, watered with mineral springs, and harvested at the peak of nutrition. Kamut® is a superior non-GMO, non-crossbred, nutrient-dense heirloom-seed Egyptian wheatgrass. We have combined it with oat and alfalfa to give it a sweet taste and increase the mineral and trace mineral content.

Organic Kamut will help rebuild healthy intestinal flora and therefore may have a positive effect on regularity and gas. Green Kamut has traditionally been used to promote regularity and does not cause constipation in most cases.

Organic Kamut Blend is a great source of chlorophyll, the most health supporting green food phytochemical. The molecular structure of chlorophyll is similar to that of hemoglobin, the protein that makes human blood red. There are perhaps no two more vital elements working in tandem to benefit the body. Chlorophyll is responsible for the release of oxygen. Hemoglobin captures the oxygen in the lungs and delivers it to the cells. Chlorophyll is known to have enormous benefits as a cleansing, detoxifying, and healing substance. It delivers the necessary nutrients to your cells, neutralizes toxins and gives protection from free radicals. It is a natural detoxifier and helps eliminate toxins from the intestines and other tissues. Because it is a natural detoxifier, it also aids in reducing bad breath. Chlorophyll also acts as an antioxidant and anti-inflammatory.

Organic Kamut Blend contains the necessary trace minerals, magnesium, potassium, and chromium. Magnesium activates the enzymes that catalyze reactions between phosphate ions and energy to muscle cells. It is also associated with regulation of body temperature, neuromuscular contraction and synthesis of protein. Potassium is the principle positively charged atom in intracellular fluid and is of primary importance in its maintenance. In conjunction with sodium and chloride, it aids in regulation of osmotic pressure (dissolved fluid absorption into the tissue) and acid-base balance. Chromium, a very hard metallic element, helps regulate metabolism and has recently become the superstar of the weight loss industry.

Organic Kamut Blend is an alkaline-forming food that does not artificially destroy the body`s acids, but instead balances them.

Organic Kamut Blend also provides protein-completing factors, all of the eight essential amino acids, as well as a number of free form proteins that are reconfigured and used by the body to create lean connective tissue and enhance reproductive functions.

Organic Kamut Blend contains enzymes identical to the most powerful and important enzymes manufactured by the body. The function of enzymes as catalysts is undeniable. Since every reaction in the body is triggered by enzymes, those which are taken in by the body as food supplant the need of the body to manufacture it`s own, therefore reducing a form of stress on the body.
Kamut seed was discovered in an Egyptian tomb in the late 1930`s. David Sandoval originated Kamut Wheatgrass in 1993 and since then Organic Kamut quickly became recognized as the finest wheatgrass powder available.

Chlorophyll containing plants have always been the “source of life” and well being for the planet and humans. To get a healthy supply in your diet you would need to eat many servings of kale, collards, turnips, mustard greens or spinach. In our fast food paced society, many of us do not have time to think about health and nutrition.