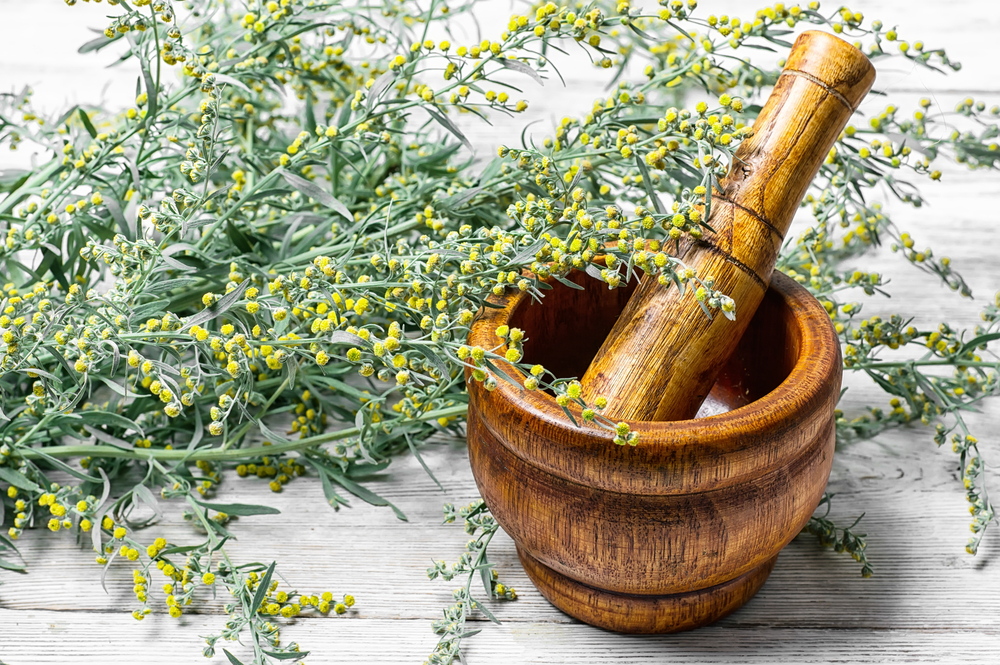 Wormwood is an herb that is also known as Absinthe, Absinthium, green ginger, madderwart, or Mugwort.  It is native to Europe, but grows in many different climates throughout Asia, Africa, South America, and the United States.  The above ground plant parts and oil have been used for medicinal purposes for thousands of years.  Wormwood can even be found in some alcoholic beverages.  The stems are velvety white with some green and silver.  The leaves are yellow-green, and have large round flowers that are pale yellow.

Wormwood is used for many different things.  It can help with digestive problems such as loss of appetite, or an upset stomach.  It can help with gallbladder disease.  Wormwood has also shown to help with intestinal spasms.  Besides digestive care it can also help with treating a fever, liver disease, depression, muscle pain, memory loss and parasite infections.  Wormwood is used in treatment for Chrons’ disease.  It also is used to treat a kidney disorder called IgA nephropathy.  Wormwood is used sometimes to help improve pain and reduce swelling in the body.  It also is a boost in antioxidant properties.  Applying directly to the skin in an oil form can help with osteoarthritis, healing wounds, and healing bug bites.  It is used in many insecticides.  Wormwood’s oil is used to fragrance soaps, cosmetics, and perfumes.

How do you take wormwood?

Wormwood stems, leaves, and flowers can be dried and used for brewing tea.  You can also find wormwood in supplemental form as well as herbal blends.  The oils can be extracted into essential oils and diluted into lotions or ointments.  Wormwood is also used in some alcoholic beverages such as Absinthe, or Vermouth.

Side Effects and Cautions of Wormwood Supplements

Taking wormwood has shown to be safe as long as you aren’t taking too much for an increased amount of time.  Short use is usually better for there isn’t much research in long term use.  In the United States the amount of wormwood that can be in any particular product is limited to 5ppm of thujone per dose.  Thujone is a chemical found in unaltered wormwood.  Even in small doses thujone can be toxic.  Make sure you consume with caution.  Long term use usually has a very low dose rate.

There are some negative side effects that can occur when taking too much wormwood.  Side effects include sleeping issues, vomiting, nausea, dizziness, hallucinations, the need to constantly move, and seizures.  High doses can result in digestive upset, and kidney failure.

If you are breastfeeding or pregnant you should not take any form of wormwood.  This is because there is just a lack of research into the safety of the herb while pregnant.  If you have epilepsy you should also avoid taking wormwood because the chemical thujone that is found in wormwood stimulates the brain and is known to cause seizures.  Wormwood may also decrease the effectiveness of anti-seizure medications.  If you have heart disease you should also not take wormwood.  It does not mix well with heart medications and could lead to intestinal bleeding.  People with kidney problems should also steer clear due to it being toxic to your kidneys and heightens your risk of kidney failure.  If you have an allergy to ragweed, or marigolds you could also have an allergic reaction to wormwood.

Wormwood contains thujone which can be toxic even in small quantities.  Wormwood also has many properties that can be medicinal.  It can help with digestive problems, treat fever, liver disease, depression, and parasite infections.  When taken appropriately it can help fight pain and reduce swelling throughout the body.  When applied directly to the skin in oil form it can help with osteoarthritis, and wound healing.  Wormwood can be found as a tea, a supplement, herbal blends or an essential oil depending on how you want to use it.