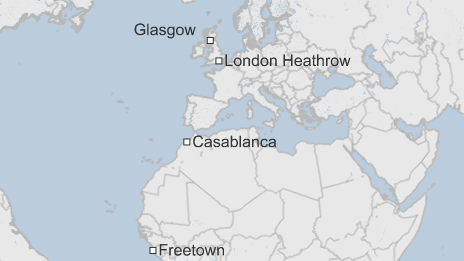 There were over 12533 confirm cases found with Ebola virus since December 24th 2014. This outbreak will be remembered for many years to come. Nobody knows how many confirm cases will arrive in 2015, the Ebola vaccine is long due and until then we can only estimate more and more deaths.

Today a heath care worker was diagnosed with Ebola after returning to Scotland from Sierra Leone, she was taken to the London Royal Free Hospital, and was accompanied with 2 ambulances and 6 police cars.

We hope that she will fully recover from this outrageous disease. Luckily only a handful of cases was found outside the outbreak countries in Africa. The Ebola vaccine is expected to arrive for general public in late 2015, read my earlier blogpost regarding Ebola vaccine: Ebola Vaccine to come “too late” in Late 2015.

Ebola outbreak that started in March 2014 and has been a nightmare in West Africa. Many volunteers arrived there from many European countries to fight Ebola outbreak. We should be proud nation that is always ready to help to give aid to people and nations in need. Sadly the aid received is no enough, too many people have died from Ebola and the only thing that can stop is the long waited vaccine.

Basic hygiene is the only thing that we have at the moment to fight Ebola. As we know this virus is contagious it can even strike from ground sand to clothing. So let’s hope that 2015 will be a good year for all of us!

2014-12-30
Previous Post: Lose 1kg or 2.2lbs in 1 Week with Weetabix and Banana
Next Post: Fitness Workout Exercise Training For Over 60s