Purium‘s Organic Barley Green JuiceTM is grown in pristine fields and watered with mineral springs to ensure it has nature`s maximum nutritional input. It contains highly assimilable chlorophyll, which is important for total nutrition and also acts as a natural detoxifier. We recommend combining it with our Carrot Juice PlusTM for an extra smooth taste and added nutritional benefit.

Instructions: Take 1 scoop (2 tsp) once or twice daily on an empty stomach. Best when mixed with pure water or alkaline juices. Do not mix with hot beverages. 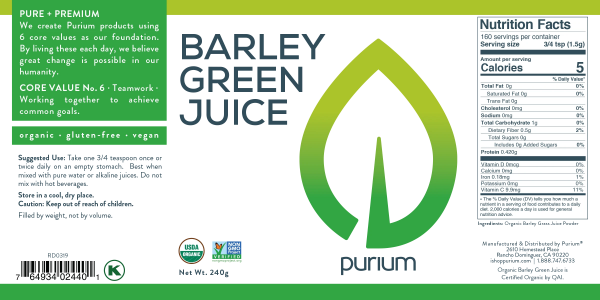 What it is: Purium`s Organic Barley Green JuiceTM is grown in pristine fields and watered with mineral springs to ensure it has nature`s maximum nutritional input. It contains highly assimilable chlorophyll, which is important for total nutrition and also acts as a natural detoxifier.

Barley has been served as a food staple throughout history and amazingly is one of the only resources on Earth that can provide the human body with the nutrients it needs from birth through old age. Research done by Agronomists shows the use of barley dates back as early as 8000 B.C. and has been used by the ancient Greeks, Romans, Chinese, and Egyptians.

Roman gladiators consumed barley as a source of energy and strength while the enslaved Egyptians consumed barley bread as their sole sustenance. Barley was also used as a food staple in late 16-century Europe and was frequently mentioned in the bible as being used by the Hebrews and Egyptians.

In modern times, it was discovered by the Chinese that animals being raised for their organs and medicinal properties produced superior results when they were fed barley leaves versus when they are fed dry feed.

>>The current prices for the Entire Purium Line as of September 19th, 2021 are Here<<

In the 1980`s, Dr. Yasuo Hotta, a research professor at the University of California San Diego discovered a special fraction in green barley juice which produces an incredible stimulation in restoring cellular DNA. Dr. Hotta discovered that these phytochemicals found in green barley contribute significantly to the reparation of DNA. In his research, Dr. Hotta stresses that the substance stimulating the DNA repair has been found only in significant amounts in green barley leaves. Green barley juice has since been consumed for its many benefits to human health.

In the 1990`s, the Diabetes Resource Center found that a dried juice from organic green barley leaves was a beneficial food for those with type II diabetes.
These statements have not been evaluated by the FDA and were not intended to diagnose, treat, cure or prevent any disease.